Cold Sake, A Yamabuki Story (The Pillow Book of a Samurai) 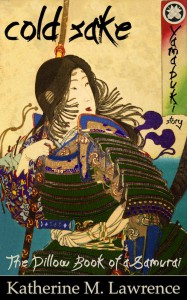 The Japanese tradition is long and complicated, with subtleties that are truly hard to capture in a work of extant fiction. However, Katherine M. Lawrence does a wonderful job of it. Peppered throughout "Cold Sake" and "Haru" are little details like using the old calendar (Year of the Monkey, for example), and translating the tongue-twister names of people in the pre-modern era so that their inherent meanings can be gleaned even by readers unfamiliar with the language.

Doubly impressive is the character Yamabuki herself, deftly crafted and executed on the page and throughout the story. Skillful, confident; full of Japanese "warrior spirit", Yamabuki embodies much of what the original tales of samurai and the feudal era would have given her, making Lawrence's work feel authentic. It is also reminiscent of Lafcadio Hearn's gothic tales of Japan, as well as "The Tale of Heike", but again, with the pleasant and refreshing twist of a female protagonist.

I was thoroughly pleased with the portrayal and use of Yamabuki's gender as well––the story avoids the usual traps of the 'female warrior trope' by keeping Yamabuki human, indeed sometimes gloriously androgynous, yet the fact she is a woman is essential to the story.

"Cold Sake" takes up roughly half of the Kindle file, with the other half being dedicated to an excerpt from a novel Yamabuki will be featured in as well. Lawrence certainly gave a great teaser––I am eager to pick up the next installment in the series.

The only problem I had was that, while the beginning and the end of the stories were quite strong, the middle parts seemed to drag at times, focusing too much on establishing more setting or explaining terms and culture for the reader. As a student of Japanese and a long-term resident of Japan, I realize that not everyone going in will have an understanding of the language, and even with the help of the well-organized appendix in the back, might stumble through a few parts of the text. Still, if you are looking for a unique window into the world of medieval Japan, "Cold Sake" is a great place to start.